If you’re wondering why the abortion issue has sprung up in this election, it’s because some folks have called out Elizabeth May and the Green Party’s ambiguity on abortion rights in Canada.

Specifically, the Green Party prides itself on being “un-whipped” when it comes to it’s potential MP’s in that the party caucus won’t force it’s views on individual MP’s. The backdrop here is that several candidates, including from Elizabeth May personally, had been revealed as either pro-life or non-committal about ensuring a woman’s right to make these sorts of decisions freely. Since this all exploded into the open, Elizabeth May has taken a strong position herself committing to pro-choice and that the Green Party has taken an absolute position on the matter. Except that if your party refuses to “whip” it’s representation, any attempt to re-open an otherwise closed legal and private medical issue as abortion is, could be done so by the un-whipped Green MP’s that Elizabeth May wants elected.

This is not a trivial matter. The right to access abortion services in Canada  was made possible by the Supreme Court throwing out laws that forbade access calling them a breach of Section 7 of the Charter of Rights and Freedoms.

That is to say, access to abortion is a constitutional right. But laws and regulations could be passed by parliament that could obstruct or add layers of interference with this right. It is imperative that candidates for generally progressive political parties be unanimous in their support of women’s autonomy to make her own decisions without interference from politicians.

Specifically, the Liberals, NDP, and Greens should have no daylight between them when it comes to women’s rights. Or human rights, since women’s’ rights are human rights.

Elizabeth May and the Green Party want to have their cake and eat it too. You cannot be both an unwhipped party and be even remotely ambiguous about Charter Rights.

So when folks charge that Elizabeth May is open to dealing with the socially conservative Conservative Party, there’s a legitimate worry here. Especially when the Green Party leader is only concerned about climate action. 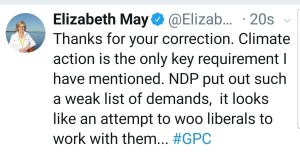 That’s why this is a big deal.

2 thoughts on “Charter rights are meant to be protected. Unanimously.”